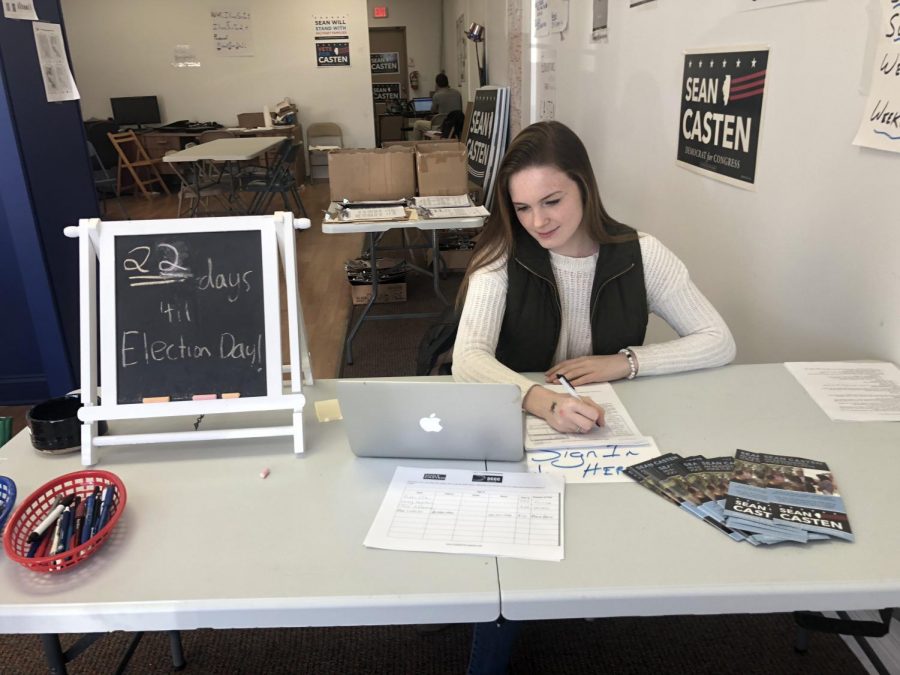 Why students  get involved
The morning of November 9, 2016, senior Amanda Dern woke up to what she found to be devastating news. The presidential election of the night before hadn’t gone as planned, and her initial sadness became shock.

But Dern didn’t stay down in the dumps for long. She harvested her frustrations through her own activism; she attended local town halls, walked in marches and attended rallies.

“My parents have always been big on political activism, so I’ve really always been interested in it, but I’d say the 2016 election definitely sparked my own activism,” Dern said. “That’s when I started to actually watch the news, read articles and go to political events and rallies for the issues I care about. I feel like that election was the spark for a lot of people because many issues and movements were formed during it.”

According to NPR, 18 to 29-year-old voter turnout in the 2016 election was 46 percent. In an analysis of recent youth political participation by TargetSmart, youth voting registration has increased by 2.16 percent since the Parkland shooting, and youth election turnout has increased by 4 percent in 2018 primaries compared to 2014 primaries.

While the increase may be slight, this uptick in youth political participation can be seen in a multitude of ways. For Dern, this means volunteering on Sean Casten’s congressional campaign. For others like junior Nick Martino, involvement means being an election judge, where he will oversee voting on election day.

“People don’t vote enough as they should and that’s a problem because if no one is voting, then we aren’t getting the accurate representatives for the population,” Martino said. “If not everyone is voting, then not everyone is voicing their opinion, which we are all given by the government and the Constitution. We are fortunately given this voice and when people don’t use it, it’s a big punch in the face to the Founding Fathers.”

Dern said she is grateful for her time on the campaign, and that she knows she is personally contributing to Casten’s success.

“I feel like political involvement is a great way to express yourself and connect with many other people who share the same values,” she said. “The feeling of making a change and doing something that will benefit others is so rewarding. Politics impact people’s daily lives, and getting involved and using your voice is essential to creating a better future for everyone.”
Why it’s hard for students to get involved
While political involvement is a priority for some students, others may have difficulty participating. For one, the schedules of many teenagers are regimented, with a tight balance between the school day, extracurricular activities, homework and personal lives. For seniors, this can also include completing college applications, some of which have a due date just five days before the November 6 midterm. Martino said he doesn’t think politics are on many students’ radars.

“They are more worried about having an actual future for themselves than a future for the country,” he said. “What I said makes it sound selfish but that’s what everyone is going to do. We are just used to how it’s always been and we have a hard time thinking about the country as a whole so why is it ever going to change?”

Further, the broad range of issues may be overwhelming when first entering the political world.

“I think it’s important for students to get involved because we are gonna be the future of the country,” Martino said. “Our generation is eventually going to be running the government. We aren’t going to stay kids forever. We are eventually going to have to depend on the government for things, just as we are now, we just don’t really realize it at this age. So, if people get involved now and know more about the subject and the topics and everything that is happening right now, our knowledge will only grow as the time goes on and will probably have a more civil and functioning society and government.”

AP Government teacher Cary Waxler said that public attention on politics tends to fluctuate depending on the time of the election cycle. For example, campaign ads and literature flood an individual’s public and personal lives in the months leading up to election day, but soon after, it all disappears.

“That’s why it’s so important to not feel overwhelmed,” Waxler said. “Pick one [issue] that you care about. Stay focused on that. Find the group that you can mobilize with that cares about that issue, whatever it is and whatever side it is, and focus on that rather than being overwhelmed by the larger structure of government in politics.”
Volunteer hours
Even if students do get involved politically, their hours would not count for volunteer credit. Student Volunteer Program Coordinator Lisa Horcher said this is due to several factors, and has always been the case.

Further, as a public institution, the school is non-partisan, meaning they cannot display any partiality to either political party. Giving students volunteer credit for volunteering on campaigns can blur that line.

“I may have volunteers for just only one candidate, and we don’t really want to show favoritism to one candidate or the other,” Horcher said.

In charge of tracking students’ volunteer hours, Horcher said it’s hard to regulate the amount of time spent completing true community work. A common part of service during a campaign is canvassing, in which campaign volunteers solicit votes by going door-to-door throughout a community.

“You’re kind of out on your own walking around the community and it’s really hard for me to verify the number of hours that students actually volunteer for a political campaign,” she said.

In a poll conducted by The RoundUp of 189 responses, 65.1 percent of students did not think it is fair that the school doesn’t award volunteer credit for political volunteering. However, 63.3 percent said they would volunteer anyway.

“Even though I’m not getting any volunteer credit for the campaign, it would be really nice to have colleges see how much effort I put into the campaign,” Amanda Dern said. “I worked over 200 hours on it, and think they should be valued just like any other volunteering opportunity. It doesn’t really matter that much to me though, because I’m on the campaign for the life experience, not the hours on my resume.”

Waxler echoed this sentiment, stating the importance of getting involved.

“If your voice isn’t known, people aren’t going to listen, so all of the issues that you care about, the reason that they’ve been addressed in the past is because someone before that came before you, a generation before you, cared about that issue and wanted to make it better for you,” he said. “You can complain about an issue, you can gripe with your friends about the issue, but if you don’t contact those people, that issue is not going to get on the policy agenda.”
Ask Waxler:
“I’m too young to vote, so I can’t get involved.”
“One of the big myths for students is that because I can’t vote, I shouldn’t get involved and nothing could be further from the truth. One of the reasons that politicians and government aren’t as responsive to student-specific issues is because they feel like there isn’t much of a reason to respond to students, so even if you can’t directly vote in an election, you can contact your legislators” – Waxler
“My opinion doesn’t matter because of my age.”
“The more youth voices we get into the process, the more things start to change to where people are listening to our students and are listening to young people. That impact can be felt on a person to person level. If you talk to a local legislator, if you share your story or your experience of it. And I understand that at 16, 17, 18 years old, your breadth of experience is pretty low, but you have things that relate to you. Your family’s relationship to an issue or you know, vegetables in schools, everyone’s got experience with going through the lunch line. You have that unique story to tell and that has a personal impact on the staffers you talk to.” – Waxler
“Policy change starts on a national scale.”
“People think that, ‘Oh, I got to contact my congressperson in Washington, my senator in Washington, the president in Washington’. A lot of the issues that impact our students are done at the local level. And so we have a mayor, we have a town council or a village board. They call different things depending on where you are. You can go to the library board, you can go to school board meetings, talk to those people. Some of the big decisions that impact your life, things like start time for schools, things like food availability in the cafeteria, things like bus routes. Those are at the school level, so you can write your congresspersonn, but they’re going to send you back to the school board and these are people living in your community.” – Waxler